When deciding which childhood book to read, there was no question. I absolutely loved reading The Magic Tree House series, and can remember reading them to my parents at bedtime. They were so good – they let my imagination run wild and were educational too, as all good children’s books should be. The books follow siblings Jack and Annie on their adventures. They find a tree house that magically sends them to the time and place of the book they pick up to read. Each book of the series focuses on a different theme of history (I have a feeling there might be one based in the future and another in a mythical place too) and sometimes geography (including outer space). So as a child, you learn a snippet of different interesting themes by reading each book in the series (of which there are 53!)

I am so happy to find out that there is still a website running for The Magic Tree House books!

I was most interested in reading The Magic Tree House #1: Dinosaurs before Dark. Which would have been perfect, based on the fact that I focused on Palaeobiology in my final year of study at University – my dissertation was on the acoustic signalling in non-avian dinosaurs! (i.e. what kind of sounds did dinosaurs make and what kind of communication might they have been used for?). Unfortunately, I couldn’t find books 1-3, so I have had to go with my second option:

The Magic Treehouse #16: Hour of the Olympics 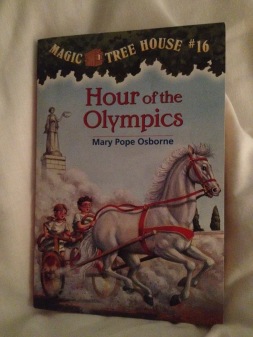 I was pleasantly surprised. Although probably biased from experiencing nostalgia, I thought the story was really nice (and exciting for a child) and I actually enjoyed reading it. I also learnt a thing or two about the ancient Olympics and Greek culture/history (and about the philosopher Plato, the mythological great winged horse Pegasus and several Greek Gods, since they had cameo appearances in the book).

The Olympics of ancient Greece were held for five days in August every four years between 776 B.C. to A.D. 394. Fighting and wars ceased for two months so that people could safely travel to the Olympic Host City, the first of which was the town of Olympia, hence the word Olympics. The games were held in honour of Zeus, the chief god of all Greek gods and goddesses. One of our club trampolines was named Zeus – before I knew this fact – which I think is pretty cool.

Overall I’m very impressed with this book. It has inspired me to learn more about the ancient Olympics and Greek Mythology. I’m also quite relieved that these books lived up to what I remember as a child! 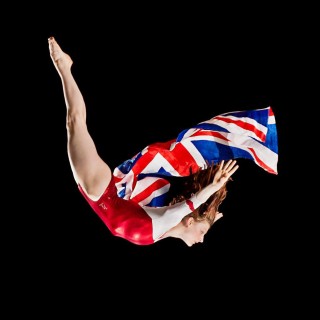